Black Panther Got Loose from the Bronx Zoo 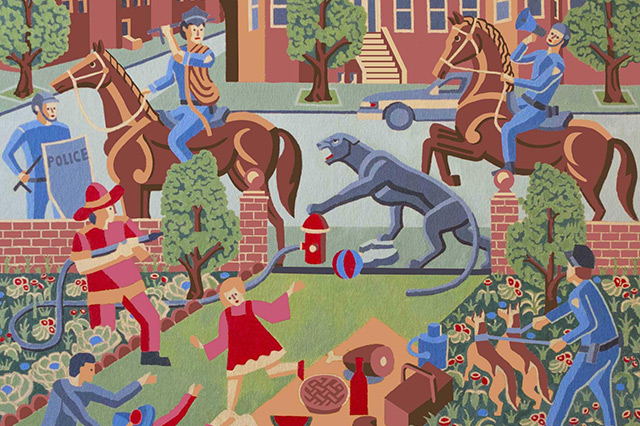 Based on an article published in the New York Times in 1902, Black Panther Got Loose tells the story of a panther who escaped from the Bronx Zoo and, after struggling with the police, dived into the Bronx River, seeking to swim to his freedom. Michaeli’s work will consist of an 8ft x 8ft wool handwoven tapestry (gobelin) and a 10-minute-long video reviewing the story behind this project and its process of making.

The scene takes place at noon in the urban space of the Bronx, showing the police trying to hunt down the panther, and the panic of passersbys. The Bronx was commonly called “the Jewish Borough” back then. The Bronx Park is also notorious for caging Ota Benga in 1906. An allegory for joint and separate struggles for justice and a reminder of the legacies of the Black Panthers movement in the US and its influence on the Mizrahi Black Panther movement in Palestine/Israel, the work alludes to issues of police brutality, gentrification, and resistance, and to questions of historical narratives, political identification, flight, displacement, refuge, and home, more broadly.