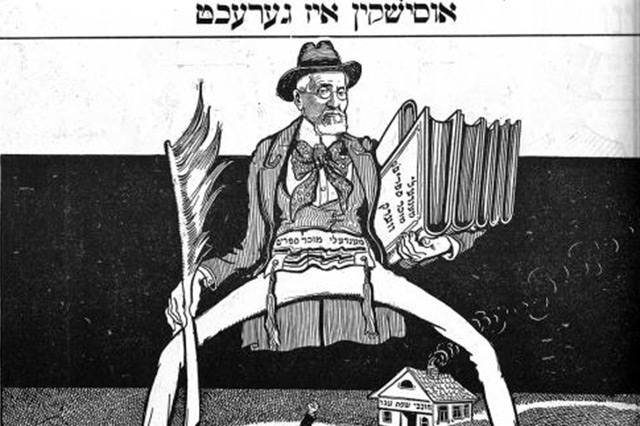 Yiddish newspapers and humor magazines contain dozens of caricatures of Yiddish writers, who were indeed major celebrities in the Jewish world. Sholem Aleichem dubbed Mendele Moykher-Sforim, Y. L. Peretz, and himself, the grandfather, father, and the son of Yiddish writing. These three authors helped bring high literary form into Yiddish during the 19th century, a time when most Jewish intellectuals looked askance at the language as a vehicle for either art or education. They were also a significant influence on younger Yiddish writers, who would follow their lead and create in the Jewish vernacular. Thanks in part to the efforts of this troika of literary greats, Yiddish went from being a provincial literature to a world literature.

Yiddish literature suffered an inestimable loss when these three “classic” authors of Yiddish literature died one year after another, in 1915, 1916, and 1917. While there are fewer cartoons of these classic writers than those writers who followed in their footsteps, those that do exist are testament to their status among readers and writers.