The Arch of Titus – from Jerusalem to Rome, and Back 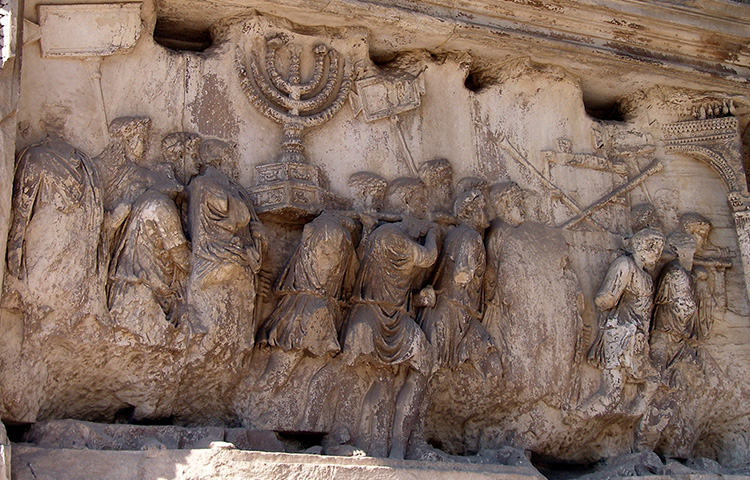 The Arch of Titus, built to commemorate Roman triumph in the Jewish War of 66-74 CE, has stood as a touchstone of Western civilization for nearly 2000 years. This exhibition explores the shifting meaning and significance of this monument – for the victorious Romans, for the defeated Jews, and for both Christians and Jews over the subsequent millennia.

Built on Rome’s Via Sacra, the “Sacred Road,” around 82 CE, the Arch of Titus features sculptural reliefs depicting Titus’s triumphal procession into the Eternal City in July, 71 CE. Painfully for Jews, the sacred vessels of the Jerusalem Temple are shown being carried into Rome by victorious Roman soldiers. At the center of the representation of the Spoils of Jerusalem is the seven-branched golden menorah, which, since 1949, has been used as the emblem of the State of Israel.

The Arch of Titus has undergone many physical changes over the course of its long history. Featured in the exhibition is a life-size carved replica of the existing Spoils of Jerusalem relief panel from the interior passageway of the Arch, based on three-dimensional and polychrome scanning conducted under the direction of Yeshiva University’s Arch of Titus Project in 2012. (The replica and projected reconstruction have been developed and produced by VIZIN: The Institute for the Visualization of History together with Neathawk Designs, of Williamstown, MA.)

Stretching from the Roman era to the present, The Arch of Titus – from Jerusalem to Rome, and Back explores the image and symbolism of the Arch from various vantage points – from emperors and popes to Jews and Christians, who re-interpreted the meaning of the Arch in modern times. Rare artifacts from collections in Italy, Israel and the United States illuminate the monument’s vibrant history, as the Arch itself went from monumentalizing victory to falling into ruination and, eventually, to being restored in the modern era.

An international conference presented in partnership with the Yeshiva University Center for Israel Studies will take place on October 29, 2017.

The exhibition is complemented by The Rome Lab, a learning space dedicated to Roman Jews, to the formative centuries of Western Judaism and to the over 2000-year-old relationship between Rome and Jerusalem, co-presented by Centro Primo Levi and the Jewish Museum of Rome.