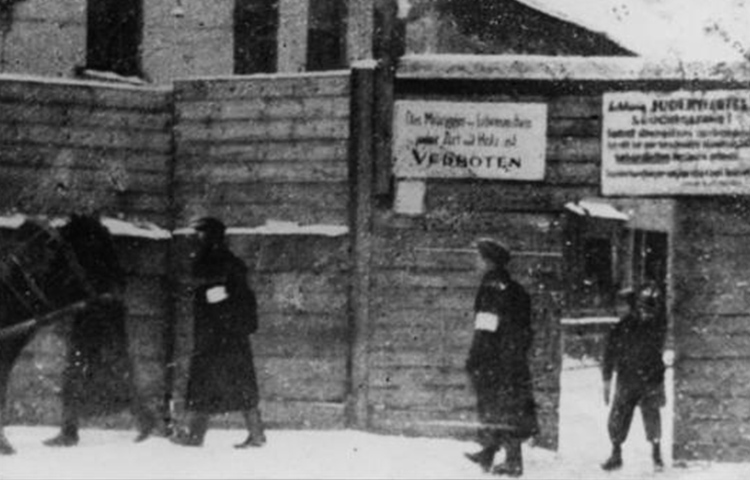 Would you risk your life for a book? A group of poets and scholars living under Nazi rule in the Vilna Ghetto did. Under the most harrowing conditions, they saved numerous cultural treasures — first from the Nazis and then from the Soviets. Known as “The Paper Brigade,” they were a group of slave laborers who smuggled and hid rare books and manuscripts in the midst of the Holocaust. Theirs is an incredible story of cultural resistance in the face of almost certain death.

A Nazi Division known as Einsatzstab Rosenberg arrived in Vilna in June 1941 armed with lists of libraries, museums, and other rare collections they intended on looting. Part of their mission was to collect materials for a Nazi “Institute for the Investigation of the Jewish Question,” an organization that was to study the Jews after they had been exterminated. Among the places on their list were the famed Strashun Jewish Public Library and the YIVO Institute.

As Vilna’s Jews were forced into a ghetto and systematically starved and murdered, the Einsatzstab Rosenberg went about the business of destroying Jewish culture. It appropriated the rare collections of the Strashun Library and took over the entire YIVO building to use as a collecting point for rare Jewish cultural treasures.

But they had a problem: their staff wasn’t sufficiently versed in Jewish culture to adequately organize and catalog all of the material they were plundering. So they created a forced labor brigade from the Vilna Ghetto made up of poets and intellectuals, including Zelig Kalmanovitch, who had been YIVO’s co-director before the war. Every day they were taken from the ghetto to the YIVO building, where their job was to sort, catalog, and pack rare Jewish cultural treasures for shipment to Germany.

While the Nazis were plundering Jewish collections for their own use, they were also systematically destroying what remained. Kalmanovitch understood that rare YIVO materials in which the Germans were not interested would be destroyed. So he and others decided to begin sneaking portions of YIVO’s collection that were not slated for inclusion into the shipments of rare Judaica being sent to Germany. Their rationale was that the Germans would eventually lose the war and, though they themselves might not survive, the treasures would.

Others working in the forced labor unit, among them poets Avrom Sutzkever and Shmerke Kaczerginski, decided to save these rare materials in a different, more dangerous way: they smuggled them into the ghetto, where they hid and buried thousands of books, documents, and works of art in hopes of returning after the war to retrieve them. While their German taskmasters weren’t looking, Sutzkever, Kaczerginski, and a crew of about two dozen brave men and women put rare books and manuscripts underneath their clothing and smuggled them into the ghetto.

These acts were extremely dangerous. If the Germans caught them, they would be executed. If the Jewish and Lithuanian police at the ghetto gate caught them, they might be beaten or arrested. Fortunately, they had contacts among the Jewish police and, in spite of some close calls, managed to avoid getting caught.

Smuggling during wartime usually meant bringing in food for starving ghetto inmates or valuables for bribing guards. Risking their lives for rare books and manuscripts seemed crazy. Even the ghetto police mocked them, calling them “The Paper Brigade.” But they understood that while they themselves might not survive the war, their daring acts of cultural preservation would serve Jews for generations to come.

When the Vilna Ghetto was liquidated, the members of the “Paper Brigade” were dispersed. Some were shipped off to concentration camps, where they perished. Others, notably Sutzkever and Kaczerginski, joined the partisans and fought the Nazis from the forests. When the war ended, the two poets returned to Vilna to find that 90% of the Jewish community had been murdered. But they also found that much of what they had buried in the ghetto had survived. They retrieved what they could and founded a small Jewish museum, a spark of life in an otherwise decimated Jewish Vilna.

The US Army’s Monuments, Fine Arts, and Artifacts Division, “The Monuments Men,” found hundreds of crates of rare materials belonging to YIVO and other Jewish libraries abandoned in a town outside of Frankfurt. Contact was made with YIVO’s New York office, where all were amazed that any of its archives had survived. Because no Jewish organizations had survived the war and because Vilna was occupied by the Soviets, it was decided to restitute the Jewish collections to YIVO in New York. In 1947, 465 crates of Jewish cultural treasures arrived in New York and, after a brief stay at the Manischewitz Matzo warehouse, they became part of YIVO’s collections, where they remain to this day.

The fate of the materials hidden in the Vilna ghetto took a number of different twists. It became apparent to Sutzkever and Kaczerginski that the Soviets were not interested in supporting a Jewish museum. In fact, they recognized the beginnings of a Soviet anti-Jewish campaign that would decimate Jewish culture in the USSR. They arranged for the smuggling of much of the materials to Poland and France, with the ultimate destination of YIVO in New York. The rare documents that were smuggled out of the Vilna YIVO and hidden in the ghetto had to be smuggled again—this time, out of the USSR. These treasures, mute survivors of the Holocaust, are what you see in this exhibition.

After bringing what he could to New York, Sutzkever emigrated to Israel, where he lived as the world’s most renowned Yiddish poet until his death in 2010. Kaczerginski moved to Argentina, where he was tragically killed in a plane crash in 1954. It is thanks to them, to Zelig Kalmanovitch, and the rest of the “Paper Brigade,” that these rare books and documents survived war and genocide.

This exhibit closed on
Saturday, December 8, 2018